Release 4 is finally out and I got all of the details for the changes that are included and there are quite a few.

This screen shot of the updated Manage Races Screen is divided by a yellow vertical line.

On the left side I circled the 2 sections of interest. The larger circle shows two expanded drop-down lists. One list shows options for “Time” and “Distance”. If you choose Time, you get to specify how many hours and minutes the race should last. In the other drop-down list labeled “Results” you get to specify if the results should record how many laps, kilometers, meters, miles, or feet each racer competed during the race’s time span. The smaller circle on the left side of the screen shot shows where you record each racer’s distance and just left of the circle is a new field Best Lap.

On the right side of the screenshot you can see what it looks like if you choose Distance for race length. You cannot see it in this screen shot, but if you were to choose Distance for length of race, you would be able to record the Best Lap and Overall Time for each racer in the results table.

The race details screen now reflects the length of race in the header of the page. The left screen is 20 Laps and the right is a 1 hour 30 minute timed race.

Another small detail you may have noticed is the presence of the 2 buttons just below the orange Results bar. The button on the left, when clicked, will show you the results for this race. The button on the right will show you the series standings after this race. This page needed the horizontal space because of the new columns, so this is the current solution. This may evolve over time. 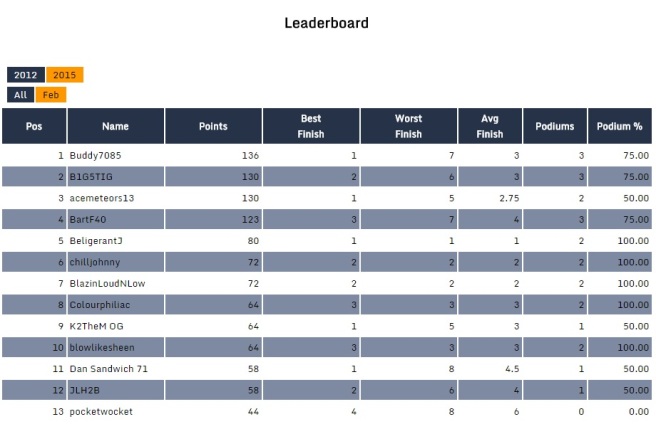 I was able to add a new stat to the Leaderboard screen. Podium % shows you how often a racer finishes 3rd or better within the given leaderboard parameters. This screenshot shows just February 2015, but could be expanded to show all of 2015 or any other month a race result had been recorded. If you have a lot of results recorded over the course of a year, you would be able to see if a racer’s podium % was getting better, worse or staying about the same. 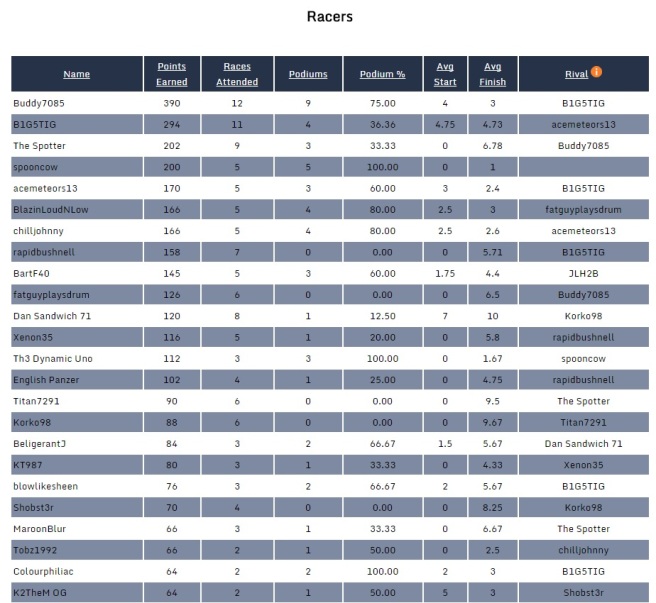 The Racers screen is like a leaderboard for the entire lifespan of the club, so it is a good place to determine overall podium % and another new stat called “Rival.” Rival shows you which other racer finishes 1 spot ahead of you the most. In the screenshot the first racer “Buddy7085” has a rival “B1G5TIG”. Imagine that B1G5TIG has finished just ahead of Buddy7085 on 6 races so far and other racers have only done it 3 or 4 times. Since B1G5TIG has done it the most he becomes the rival. The club I race with finds this stat really fun because it gives you someone to try your hardest against in-race. Whether you are trying to get rid of your current rival or trying to stay as someone else’s I feel like this is the first time an online statistic has impacted in-game play in a meaningful way, at least for our club.

I am really excited to be able to deliver these new enhancements and hopefully it adds to your game play experience. I will be prioritizing what small updates should go out next and also what bigger features should make it into Release 5. I will let everyone know as soon as I figure it out.

I pushed an update that I did not plan on developing for a while, but I’m glad it is out there. Now club admins have the ability to edit their club URL slug. I think I’m using the technical term “slug” loosely, because all I really implemented was a smart 404(page not found error) page.

“RDUX” is not a directory or page on the Racing Club Manager site so technically you’re getting a 404 page not found error and my 404 error page extracts the “RDUX” out of the URL you tried to access and looks up what club to navigate to. If you were to incorrectly type the slug, you will get the normal 404 error page.

You can edit your slug on the Club Profile admin page. It can match your club name or be something totally different. It must be unique and cannot contain any special characters other than spaces, underscores, and periods.

You should know that using a space is going to break the link when trying to share it with people on twitter, facebook or really any site. If your slug has a space, it will still work if you were to type it directly into a browser.

I hope someone finds this feature useful as I have for my own club, thanks for reading!

No sorry I don’t have a release date yet, but I do have a screenshot of the manage races screen to show you. I outlined the sections that have changed in red and orange below. 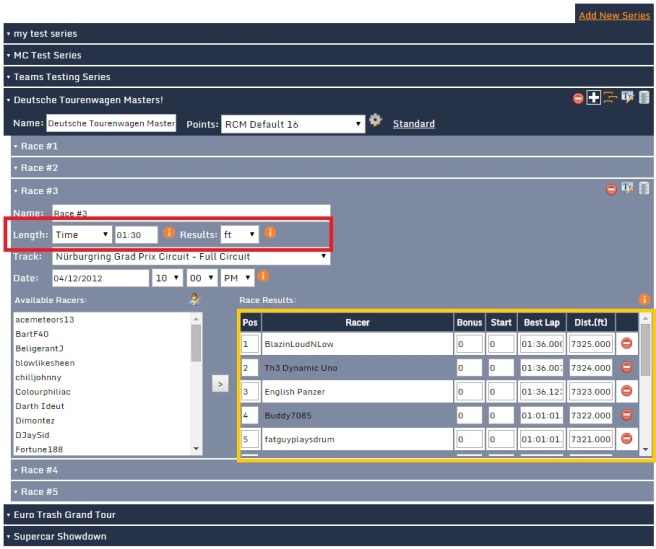 In red, it used to only allow you to specify a number of laps. Now we have the ability to define the length of a race as either a distance or a time. Time is recorded in hours and minutes and you also have the option to define what the unit of measure will be in the results. As people who run endurance races know, if you race for 2-3 hours you would record your results in feet or meters traveled over the course of that 2-3 hours. You can choose between laps, miles, feet, kilometers, and meters for units of measure and can record up to 3 decimal places for accuracy.

In the orange, I have added new fields to the results capture area. You can now record each racers best lap time and depending on whether your race is based on distance or time, you can record the total time taken to complete the distance or the total distance traveled in the amount of race time.

It seems we might be running out of room in the results capture area, so when we eventually add more fields we might have to change our user interface to allow more room and ease of use.

I still need to work on the race details and series details screens, as well as the club home pages to implement showing the data that can now be captured. We are still probably a few weeks away from release but I will update everyone on a more stable time frame soon.

Thanks for reading this and for choosing Racing Club Manager to assist you in your digital racing lives. As always any feedback or suggestions on how to make this site work better for you is greatly appreciated, so contact me ASAP.