Release 7 is all about individual racer statistics. Until now we have had the leaderboards page and the racers pages, and they do provide some good data to pour over, but it doesn’t really let you evaluate a racer’s performance at-a-glance. The following post will detail all of the features of the new “Racer Detail” page. 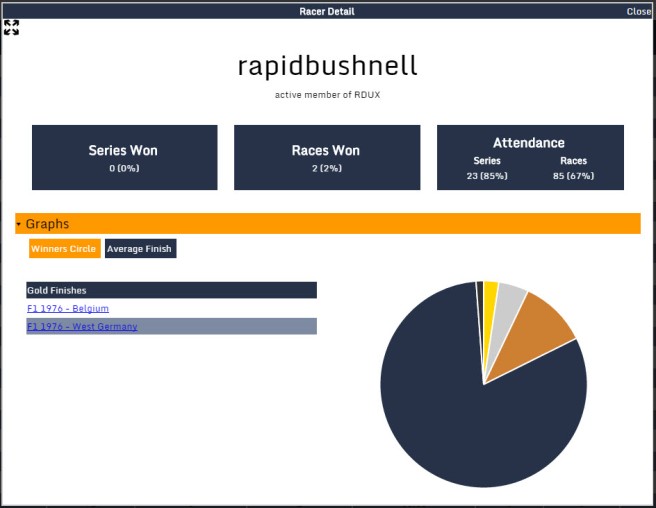 Here is the racer detail page viewed in a dialog box. At the top left of the dialog you can see an icon with 4 arrows pointing outwards. Clicking that icon will break the page out of its dialog and open in a full web page. The full page view is good when studying the Average Finish chart which we will discuss later.

At the top of the page you can see the racer’s name or gamer ID and their status in the club they belong to.

Below that we have 3 dark blue boxes, Series Won, Races Won, and Attendance.

Series Won will show how many series this racer has won, rapidbushnell has never won a series 😦 In parenthesis you can see what the series winning percentage is. If rapidbushnell had won 5 series out of 10 that he attended, the percentage would be 50%.

Races Won is the same as Series Won, but showing data for individual races. rapidbushnell has won 2 races, which is only 2% of all the races he has attended.

The Attendance box is divided by Series and Races. Shown here, rapidbushnell attended at least 1 race in 23 distinct series held by this club, which is 85% of all series this club had scheduled. rapidbushnell has attended 85 races, which is 67% of all races ever held by this club. These numbers do not take into account races or series that are scheduled but have not yet been completed.

The Winners Circle pie graph allows anyone to see how often this racer gets Gold, Silver, Bronze, DNF, and Non-Podium finishes. The large dark blue slice above represents the non-podium finishes. The tiny black slice represents DNFs. Each slice in the graph can be clicked and a list of races will populate in the table on the left. You can click into any of those races and see the full results of that race and the series standings up to that point. This graph really highlights the at-a-glance evaluation that we are striving for with this release. You can immediately  tell that rapidbushnell rarely podiums, but consistently finishes races to completion.

The Average Finish line graph shows the change in the racer’s overall average finish position after each race. The Y-axis shows the range of finish positions that this racer falls within. On average rapidbushnell finishes between 5th and 6th place, but closer to 6th. The X-axis shows the date MM/DD of each race and the actual position achieved. While studying this graph you can see that before his race on 6/1 his average finish position was around 5.85 and that on 6/1 he finished in 9th place which brought his average up to 5.9. This graph currently only looks at the past 60 days, but we have plans to expand the capabilities of this graph in the near future. Although rapidbushnell doesn’t finish low enough to really affect this graph in a major way, you can at-a-glance see where he is most likely to finish during a given race.

The racer detail page is built so that we can add new graphs when we find that they could be useful, or upon request. Thank you for reading this post and I hope it helps explain some things if they weren’t obvious. If you have further questions or suggestions just leave a comment or contact us: rcm@racingclubmanager.com